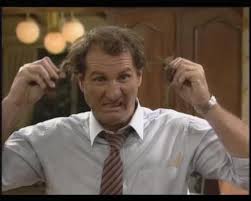 “Oh, you think the twos are bad?! Just wait until they hit three! They’re even worse!” Just wait, they said. It’ll be bad, they said. Who are “they”? Try every parent I ever encountered in the last three years. And ya know what? THEY WERE RIGHT. I feel like I’m walking on eggshells, or through a mine field, at all times. It’s a matter of when not if a tantrum is coming. Because OH IT’S COMING and it’s coming STRONG. You see Al Bundy over there on the right? That’s how I look pretty much at all times when at home. With less hair, because, ya know, balding.Honestly, I knew that tantrums were horrible and that they’d come and go. I didn’t think that literally EVERY SINGLE THING EVER would cause a tantrum at a moment’s notice. Seriously, we don’t have goldfish in the car? SCREAM, HIGH-PITCHED SQUEAL. No fruit snacks? Rinse, repeat. Turn off a song before it’s over to get out of the car? I might as well have just lit her favorite toy on fire in front of her: it would cause the same reaction.

You see our boy Cory Matthews from everyone’s favorite hit TV show from the 90s, Boy Meets World? That’s how I feel every single time a tantrum starts. I also want to run to my room and hide under the bed. I’ve considered calling 911. When the dispatcher would ask me what the emergency was, I’d tell them that I have a raging tantrum-throwing toddler in my house. And to send backup. They won’t send backup. They’ll tell me to stand up to her. I’m sorry, have you ever tried standing up to a toddler mid-tantrum? It’s like negotiating with someone who has taken hostages that are making unreasonable demands. Or that’s what I think it would be like.

“What do you mean you want to have candy for dinner? No!” AAAAAAAAAND screaming fits of rage. Snot flying everywhere. The waterworks are flowing fully. The body goes limp and falls to the ground. Do I dare try calming her down? I’ve tried. Lord knows I’ve tried. But that my friends, is a fools game. Don’t interrupt a toddler mid-tantrum. Not unless you want them to ramp up their screaming game. What do you do instead of attempting to calm them down? Do you give in? Don’t lie, every single one of you has given in at one point or another to the demands of your tyrannical toddler. Don’t get me wrong, I love Sophia. She’s awesome. She’s funny. She’s smarter now than I’ll probably ever be. And she knows what she’s doing. She knows how to play the game. Later in life, that’s gonna pay huge dividends for her. But right now, I just want the screaming to stop. The next tantrum will probably start before she even walks in the door when she gets home. Probably because we shut the car door and she didn’t get to.

When the tantrums start flyin’, and the kid starts cryin’, I know for sure that most of us feel the way that Jess from Shuggilippo feels in the gif below.

What do you do when your kids starts the meltdown? How often do your kids freak out at home and in public? Let me know in the comments, on Facebook, or Twitter!

4 thoughts on “What Time Is It? Tantrum Time”