A show of hands for those of you who have at least one nickname. Ok, by my count it looks like it’s almost the entire class. Good, good. Me? Throughout my life I’ve had approximately 1,674 nicknames. I can’t think of a time I haven’t told a friend, co-worker, family member, or total stranger a story of how I got one of my many nicknames. The longest running ones: Brownie–a play on my name; Duck–a nickname I earned in seventh grade; and Tittles–my nickname since college, that many, MANY people only knew me by. But, what about our kids? I’m sure if you have older kids, they’ve already earned plenty of nicknames in their lives. Chances are you’ve given them at least four. And, their friends have probably given them even more. 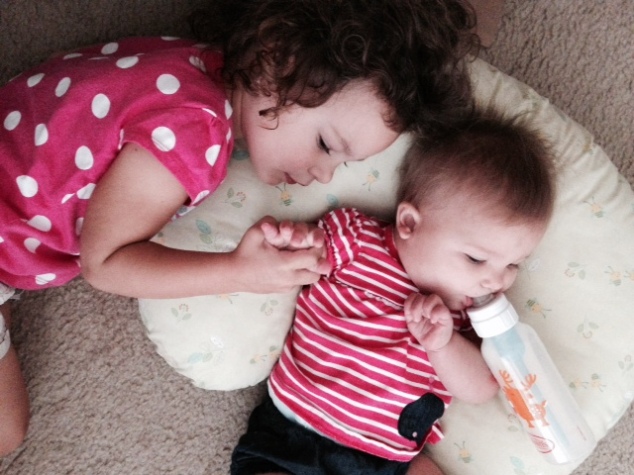 We’ve already given Sophia and Maddie their fair share of nicknames at this early stage of their lives. Sophia has been known at different times as the following: Soapbox, Sopha-rope, Boo Boo, Tornado, Sophia the First, and Miss Sophia B. Maddie, at the ripe-old age of 11-months already has earned a fair amount herself: Mad Dog, Maddie Moo, Moo Moo, Mo Mo, Magoo, and someone once called her Fatty Maddie (I’m lookin’ in your direction, Zach-O).Honestly, I love nicknames. I’ve always worn my own as a badge of honor. Whether they come from some sort of embarrassing story, or even if they are an absolutely ridiculous nickname that makes fun of me, I love them all. Hell, I’m currently known as “Todd” in my office after a second guy named Nick started. Yes, even though I was there first, I get relegated to the name change. Makes sense, right? Nope.

Anyway, I want my girls to appreciate the art of giving nicknames, as well as owning the nicknames that are graced upon them. I mean, if you can’t embrace a nickname, what fun is it? Even if someone who you aren’t particularly friendly with decides they want to give you a stupid nickname as a way of making fun of you, own it. Take the power from them. Now, that may not be the case if it’s a truly awful nickname, but the ones that aren’t, just go with the flow. Duck was an embarrassing nickname for me, but I just went with it and now 20 or so years later, it’s still sticking.

I’m the kind of guy that is always looking for opportunities to give someone a stupid nickname. And that goes for my kids, as well. If they do something that I feel is nickname-worthy, guess what? I will nickname the crap out of them.

BONUS VIDEO TIME: While launching her remote control fire truck down the stairs, off a slide, Sophia decided it was time to join the “Bobsledding” team and take to the stairs herself.

12 thoughts on “The Nickname Game”