When I was a kid, my mom used to say “I can’t wait until you have a kid and they are JUST LIKE YOU. Paybacks.” That’s a true story. You know what else is a true story? The fact that she got her wish. From the day Sophia started being mobile, she has been non-stop. I mean NON-STOP. Talking all the time? Check. Running around non-stop? Check. Never wanting to sleep? Double-check.

While I should have been able to put two and two together a long time ago, it didn’t really click until recently. For whatever reason, Sophia’s penchant for not wanting to go to sleep at night, coupled with wanting to sleep in every morning, ya know except for weekends, reminded me of myself from every day until I had kids. And, yes I know that wasn’t me as a kid, it was me as a teen and a child-free adult, it’s what really made it hit home.

As my parents can attest, I was ALWAYS moving when I was a kid. I wouldn’t shut up, either. It’s one of the reasons that anytime there was a crash, a boom, a smash, or the sound of tears or something breaking, the immediate yells were always “NICHOLAS!!” Half the time, I wasn’t the guilty party. Thanks for letting me take the fall so many times, Em, Chris, and Alyssa… you bunch of jerks! Granted, plenty of times I was guilty. Yes, it was me who threw a fit when our babysitter told me I couldn’t have cheese whiz with my pretzels… and threw a shoe at the door, shattering the storm window. But, that’s not my point. Okay, maybe it kind of is my point… 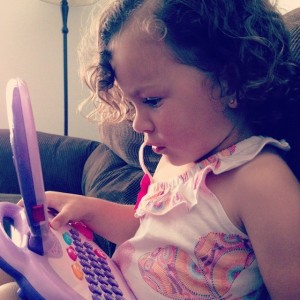 Sophia does things like that constantly. Doesn’t get her way? Tantrum. Yeah, I wrote about tantrums recently, and that’s not what this post is about. It’s funny the things that you see in your children that remind you of yourself. And then when those things drive you nuts, it’s even funnier. I should love the things that Sophia does that remind me of myself. After all, I think I’m pretty awesome… whether or not other people feel the same, well that’s up to them to decide, and probably disagree with me on.

When I was a kid, I loved to read. Now, Sophia loves reading. Okay, she loves when we read to her. At bedtime, or in the middle of the day, it really doesn’t matter, she just loves her books. When it comes time to go to sleep and she wants one more book about a thousand times, that’s when it gets a little tough.

I lived outside as a kid, too. Always playing in the yard with my brother and sisters, friends, and neighbors. If I wasn’t outside when the weather was nice or there was snow on the ground, I was either stuck inside because I was sick, in trouble, or doing homework. Sophia wants to play outside all the time. Take our dog, Dubsy, out back to go to the bathroom? “I wanna come with you!” And, she even wants to pick up the poop and then throw it in the trash… That one I don’t get, though. I prefer to stay as far away from poop as possible, if that was even a remote possibility.

The funny thing is, I was always a shy kid. I was careful who I decided to be friends with, and sometimes that made things difficult. With Sophia, she is friends with everyone. Random stranger at the mall or the store? “Hi!” Now, hopefully as she ages she gets choosy with her friends and doesn’t hang out with the wrong crowd. But, that’s a conversation for a much later time.

She keeps Sarah and I on our toes at all times. When you have a kid that is constantly going, it can be tough to reel them in and get them to calm down. It’s a battle, but it’s so much fun. One of the best things is that she always wants to do fun things. Things like make forts, make a ramp out of a slide, a folding table, and the stairs for a remote control fire truck, or even create obstacle courses through the house. I LOVE those things. I did those kinds of things as a kid all the time, and if that is one of the things that we have in common, who am I to argue?

While she can be a handful a lot of the time, watching her age, find things she enjoys, and learn really does make this whole parenting thing the best thing in the world. On that note, I think I just heard something break… “SOPHIA!!!!”