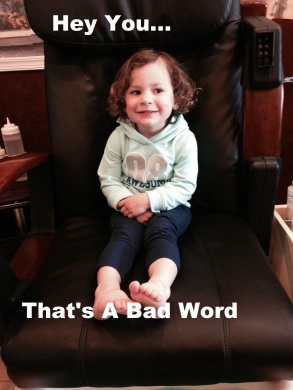 I’m sure I get stared at like I’m completely out of my mind. Which, let’s be honest, half the time I am. Sleep deprivation will do that to anyone. But, seriously, I tell ADULTS that words are bad words. As if they don’t already know that what they are saying is, in fact, a bad word.

I’m sorry, fellow grown-ups. I don’t do it on purpose. Yes, you know what words, phrases, and vulgarities you can use, pretty much whenever you want. I’m just a dad of small children spouting off what I would say to them, out of habit. It’s amazing the habits we get ourselves into through being parents. It’s like leaving those children’s CDs playing in the car when there hasn’t been a kid in the car for 20 minutes. Or like watching Disney Junior or Sprout when you’re home by yourself. You forget what your surroundings are. You’ve lost your bearings. We want to stop. Seriously, we REALLY wanna stop. Insane habits are hard to break, though.

So, next time you’re around me and hear someone say shut up or dammit, do me a favor? Put your hand over my mouth before I can blurt out “we don’t say that, it’s a bad word!” It’s what is best, for all of us.

What crazy practices have you gotten into as a parent that you let carry over into daily interactions with other adults? Let me know in the comments, on Facebook, and Twitter!