Having two–or more–kids can be a whirlwind for some people. It is for us, it seems, more often than I’d care to admit. A lot changes when you go from one kid to multiple. You get so used to spending all your time with just one kid and they get used to spending time with you. Uninterrupted time where they are the sole focus. You’ll hear a lot of people tell you that you need to carve out time for that child once the second one comes. That they need your attention. Solo attention. But, that can easily be forgotten along the way. 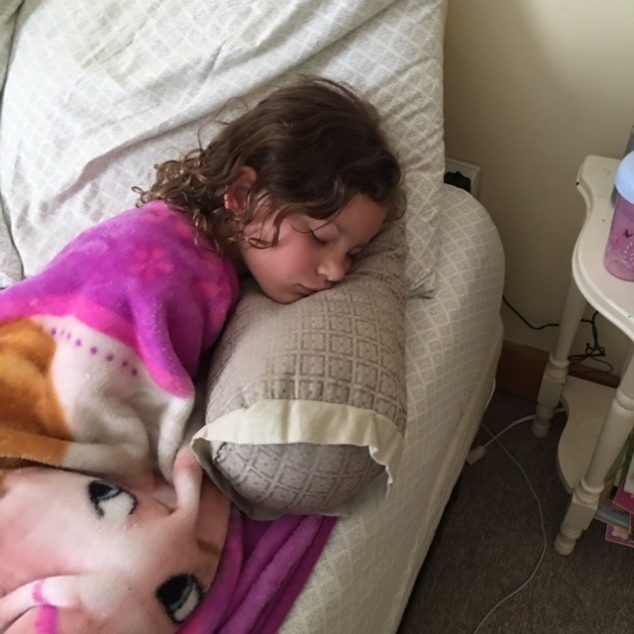 Sometimes sick days can be a reminder of something you were missing.

I’m guilty of forgetting. Maddie is about to turn three in a few weeks and Sophia is starting kindergarten in just over two weeks. It’s crazy how fast that time has flown by. I’ve found myself getting increasingly irritated, annoyed, angry with Sophia. She’s a demanding kid and knows what she wants. When she doesn’t get it, she’s not happy, and well, I’m sure you can imagine how it goes. It’s been rare in the last three years that either I or Sarah have gotten to spend a ton of time, just one-on-one with Sophia. We let that attention escape us. Not on purpose, mind you. It just happens when life is busy and you’re trying to balance schedules, life, tantrums. All of it.

A funny thing happened this week. Lunchtime on Monday I got a call that Sophia was sick. High fever and her belly was upset. So, off I went to pick her up. And as is always the case with a fever and daycare–she couldn’t go back on Tuesday. So, home with me she stayed as I tried to work from home. We spent the entire day together, save for the out-character 2-1/2 hour nap she took. She was, in a word, perfect. No outbursts, no tantrums, gleefully went to the doctor to get her ear checked out (yes, it was an ear infection). She listened to directions and was just a joy to hang out with. I don’t know if I’ve forgotten how great it is to just spend time with her–just the two of us–of if I’ve just gotten used to not doing it. But, it brought me back to pre-Maddie days. When spending time one-on-one wasn’t ever a problem. Hell, I was a stay-at-home dad with her when she was a baby.

Really, what the last couple of days have served as are a reminder that I need to go out of my way to make sure I spend plenty of quality, one-on-one time with her. And with Maddie, too. They need to know we want to spend that time with them. Who would’ve thought it would have taken a sick day to remind me of that.