The song in the video above is one I vividly remember from my childhood. I recall a different voice singing it when I was a boy, but the lyrics remain. The chorus has stuck with me for what feels like forever:

Have patience, have patience
Don’t be in such a hurry
When you get impatient, you only start to worry
Remember, remember that God is patient, too
And think of all the times when others have to wait for you

In fact, when we’re in a hurry to go somewhere or Sarah gives me a hard time to get me moving to get out the house, I’ll often sing the chorus to her. I used to be patient. I used to not worry if I was running late, or if I was stuck in a crowd, or anything along those lines. Now? I’m quite the opposite. I don’t know when my patience deteriorated to the level it is at now. But, my lack of patience has really been shining through when it comes to being a parent. 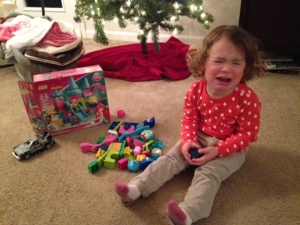 This face happens quite a bit.

Especially now, with Sophia having just turned three, my patience is extremely thin. Having a toddler in the midst of the “terrible twos” and now into the “can the threes really be worse??” can really test a parent’s patience. And trust me, it has been TESTED. My reactions to tantrums or outbursts aren’t the best. I know that. I hate it. And it absolutely drives me crazy. I want to be calm in moments of explosion. I want to laugh in the face of a toddler’s tantrum. For some reason, right now, it’s just not there for me. I don’t want to snap at my kids. In the grand scheme of things, the tantrums they are throwing right are over nothing. So, why should my reactions make it seem like they did the worst thing ever? They shouldn’t be.

Whoever said that having kids gives you patience is out of their mind. Or maybe they said that having kids tries your patience. That would be more accurate. I see other parents, I see teachers, and I see Sarah reacting calmly and reasonably to outbursts and tantrums, for the most part. I want to have those reactions. Yelling at my daughter isn’t something I want to do right now. When she’s a teenager? Oh yeah, I know there’s gonna be plenty of yelling.

The worst part is that I know Sophia is learning from my reactions. She sees me react with anger. She knows I get upset. While driving in the car with her today, she said to me “did that person make you angry??” after a car in front of us parked in the middle of the road for no apparent reason. I didn’t overreact to them stopping. I barely said anything. But, she expected me to have a bad reaction and for me to be angry. She’s learned that from seeing how I react when she does something that upsets me. That, honestly, breaks my heart. While I may be angry on the inside about a lot of things, I don’t want my little girls to see that side of their daddy. They don’t need to know that part of me.

Lately, I’ve been trying to take a few breaths before reacting to a situation. I work to stay calm before I say anything after Sophia misbehaves. If I’m going to find my patience, it’s gotta start somewhere. Who knows, maybe with more breathing and less yelling or getting angry, I’ll actually stop being angry on the inside, too.

My girls deserve better from me.

6 thoughts on “Where Can I Find My Patience?”