One example of dad-bashing from Mom.me

Typically, I like to keep things fun, lighthearted, and all about the silly little things that happen daily in my life as a parent. But, sometimes, a stand needs to be taken. Sometimes, I need to fire back when I see something, or somethings, that are wrong. Dead wrong. This is one of those times. What am I talking about? Dad Bashing.

That first image that you see there is a screenshot from the Facebook page of Mom.me. I first learned about that photo when a fellow dad blogger brought it to the attention of the dad blogging Facebook group I’m a member of. What happened next was awesome. Many of the dads took to that photo and lambasted mom.me for posting something that calls out dads as being, in a word, inadequate. Unprepared, lazy, inattentive, and not on the same plane when it comes to parenting as mothers.

One of the ways society should view dads.

I’m not just talking for the sake of talking. I’ve walked the walk. I WALK the walk. For those that don’t remember, I was a stay-at-home dad with Sophia for the first six months of her life. I had no plans to go back to work, either. I just happened to get an offer I needed to accept.

The fact that there is this view in society that dads aren’t up to snuff is a problem. It’s not even that we, as dads, find it offensive. It’s that it’s just flat-out wrong. In most cases, dads are heavily involved in raising their children, in carrying the load, and are on an equal plane as moms. We do it together. We are equal partners. It’s as simple as that.

Then there is this story from CBS.com, “When a Kid Gets Fat, is Dad to Blame?”, based on a study done by Texas AgriLife Research. What’s it say? Below are a few excerpts.

“Dads who have no trouble eating food in a fast food restaurant are going to be more likely to have kids who do so,” Dr. Alex McIntosh, sociologist at AgriLife Research, said in a written statement.

McIntosh says fathers need to learn more about fast food’s nutritional content, and take responsibility for their kids nutrition. He says dads tend to let their kids choose where they want to eat more than moms.

“So basically all you really need is a dad who says, ‘no, I think we ought to eat someplace else and this is why,'” McIntosh said. “It’s about a father taking more of a responsible role when he’s parenting.”

Seriously? “Studies” like these are a part of the problem. They continue to set up dads as having no clue. Enough already! What, we don’t know what is and isn’t good for our children to eat? We are just pushovers when our kids want to eat something that isn’t in their best interests? Are we all just Homer Simpson or Peter Griffin? Hell no! 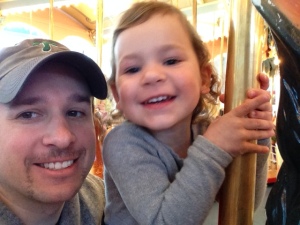 Another example of how society should view dads

Are there bad dads? Absolutely. Are most dads doing the right things and being an active participant in the upbringing of their kids? You bet your ass they are. Take a look around and you will a majority of dads kicking serious butt in their roles as fathers. Let’s stop the dad-bashing, let’s stop making dads out to be the one’s who have no clue, and let’s give them their due. We are positive male influences in the lives of our kids.

If you want to see an ad that shows the type of relationships that many, many, many dads have with their kids, take a look at this awesome Lego commercial. THAT is how dads should be portrayed.

Along the same lines, Huggies was bashed earlier this year for their commercials from their “Dad Test” commercials. So, they went back and changed their ads. See the story about the revamped ad at DaddyDoctrines.com.

Are you tired or dad-bashing? Stand up, have a voice, get the word out that you, your husband, your father are doing things the right way. Things won’t change until more people start seeing and hearing the stories of amazing dads.

9 thoughts on “The Dad-Bashing Needs to Stop”