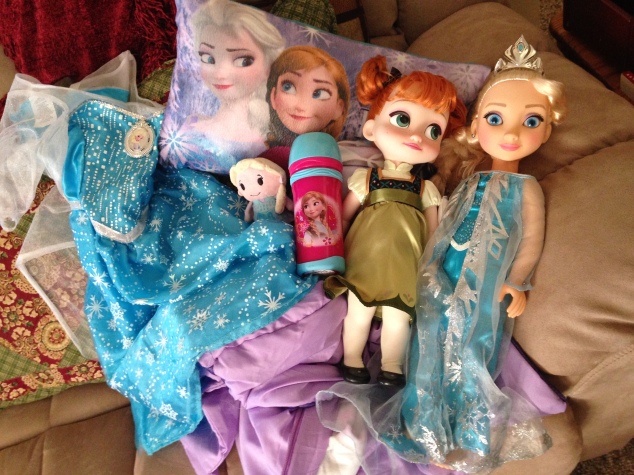 Just a small sampling of all the Frozen gifts Sophia got this year.

If you don’t count the million-plus times I’ve been tortured with watching Disney’s Frozen, you can say that I really didn’t have that much of Frozen in my life. Yeah, Sophia had a few dolls, a dress, and couple knick-knacks, and will sing “Let it Go” for hours on end, but now things have been taken to entirely new level.

Folks, after this Christmas, I have officially been Frozen out. I’m not kidding. Like, at all. All of Sophia’s gifts were wrapped in Frozen wrapping paper. All she wanted from Santa were “an Elsa doll and an Elsa dress”. And, of course she got it, from her aunt and uncle. Did I mention that this specific dress lights up and plays “Let it Go”? Oh, I didn’t? Yeah, it does that. She wants to wear it to bed, all day long, inside, and outside. The song has played so many times that I’m ready to rip the battery out. And that’s only after two days… Christmas Eve–she got the doll and dress. Christmas Day–gifts wrapped in Frozen paper, Frozen pajamas, Frozen sheets, Frozen blanket, Frozen sleeping bag, Anna doll, Frozen water bottle, Frozen books, Frozen puzzles, Frozen games.

And, ya know what? It’s not over yet. No. We do Christmas with my family and siblings this weekend and I KNOW she’s getting even more Frozen stuff. She’s even going to see Frozen on-ice with my sister and brother-in-law. Lucky for me, I won’t be going to that. I honestly don’t know if I could take it.

I do love that she just LOVES the movie and the characters and the songs. I do. It makes her happy and really, isn’t that what’s important? Yes. Ok, well mostly. I think my sanity should play a small role in this, but clearly it’s not that important…

I thought Frozen had hit its peak earlier in the year. But, no, Christmas brought it all back again. Did I mention that she’s already watched Frozen today? Yeah, because she has. And, the Frozen train doesn’t seem like it’s going to slow down any time soon, with the Frozen short coming out when Cinderella hits theaters in the spring.

Someone please rescue me. I don’t wanna get sucked in agai…. “LET IT GOOOOO LET IT GOOO CAN’T HOLD IT BACK ANYMOOOOOOOOOOOOOORE…….”

4 thoughts on “I’ve Been Frozen Out”